How quickly a year goes by. The Lemon Grove Cake Diaries is celebrating it’s first birthday today and of course what is a birthday without cake. Before you get too excited, I haven’t made a cake  especially for this birthday. I have just finished making a cake for my Mum who is visiting from New Zealand and making another cake just seemed too greedy even for me 🙂

Thanks to everyone who has followed my blog and for all the lovely comments over the last year!

So without further ado here is a look back at some of the cakes from the last year. 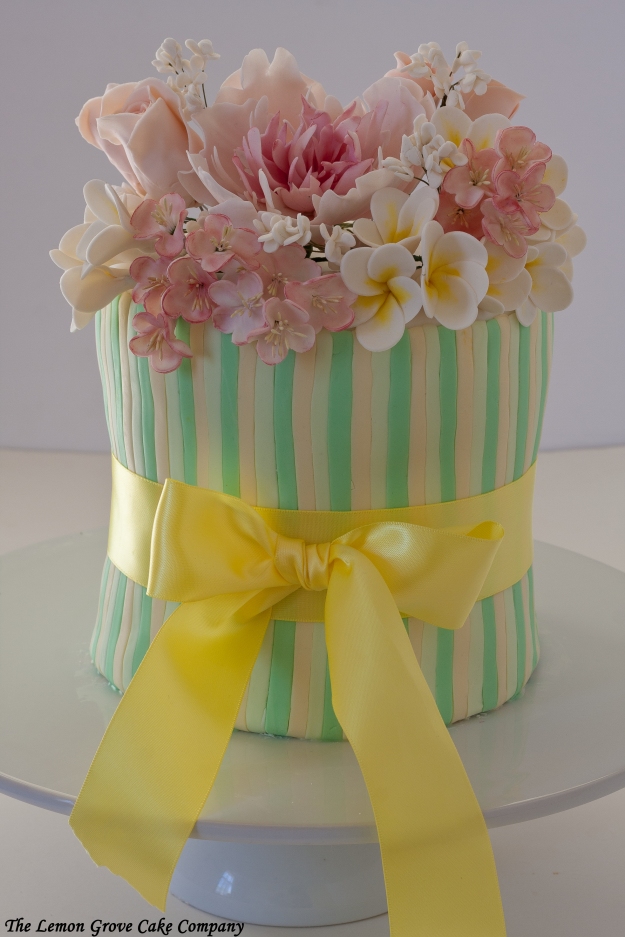 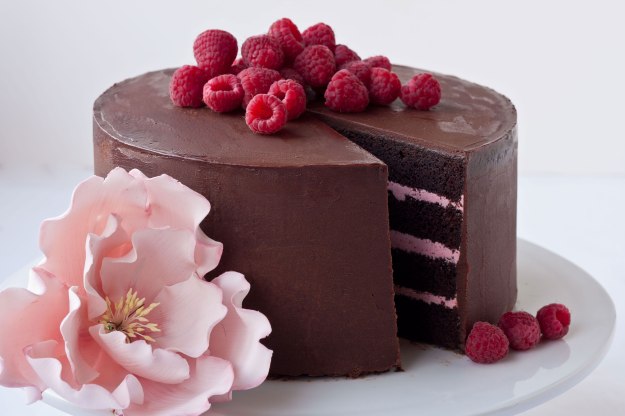 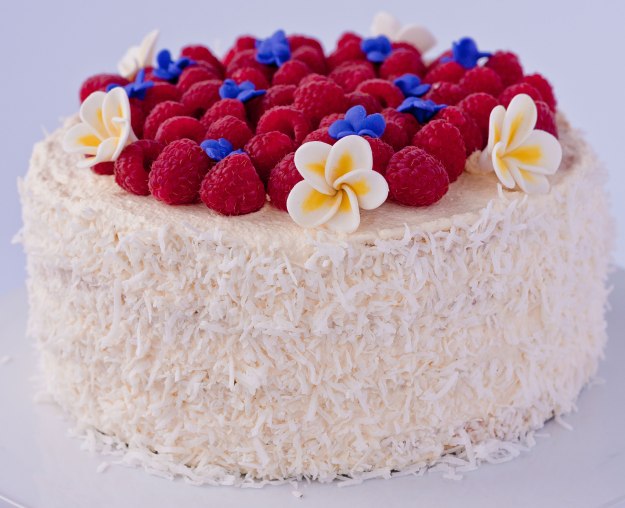 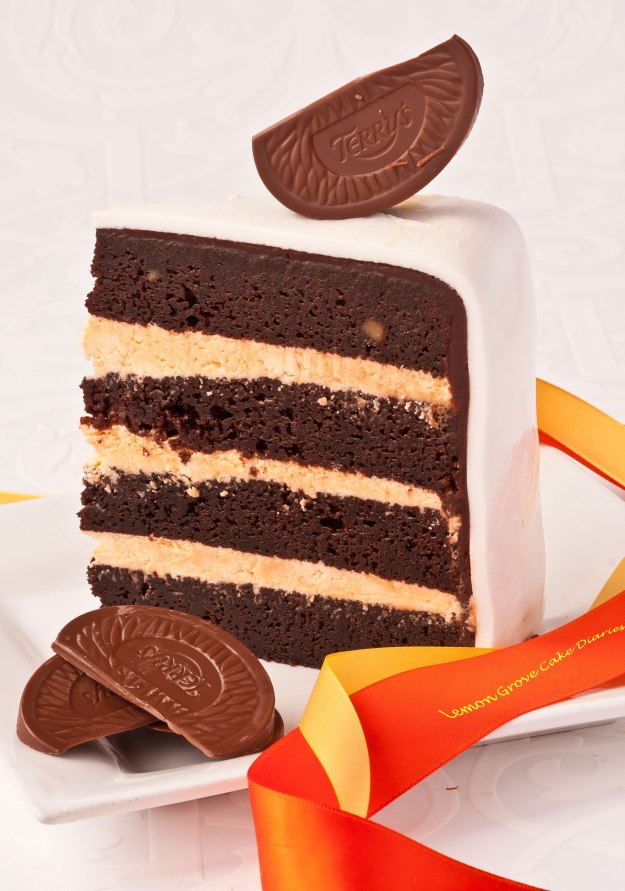 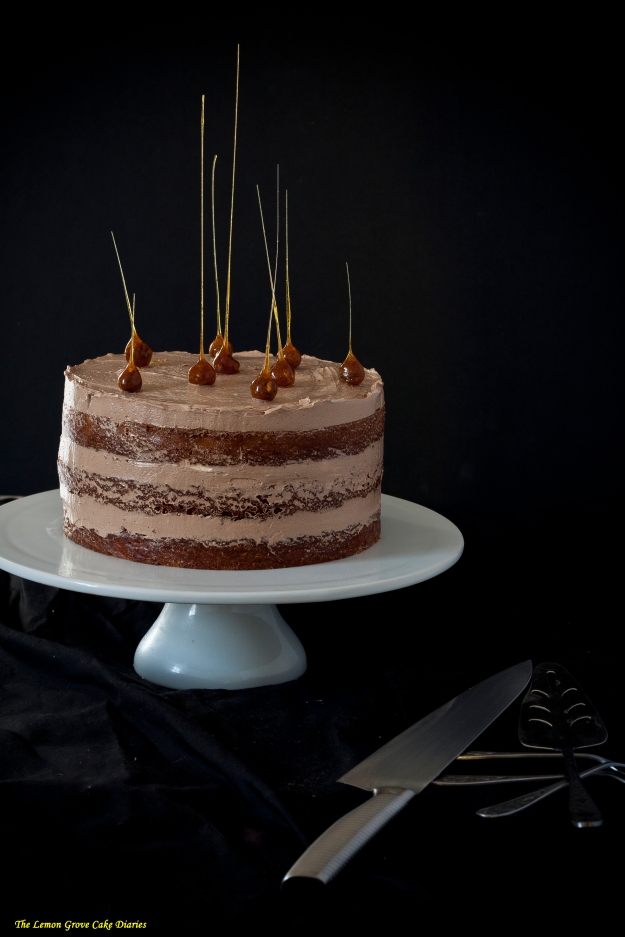 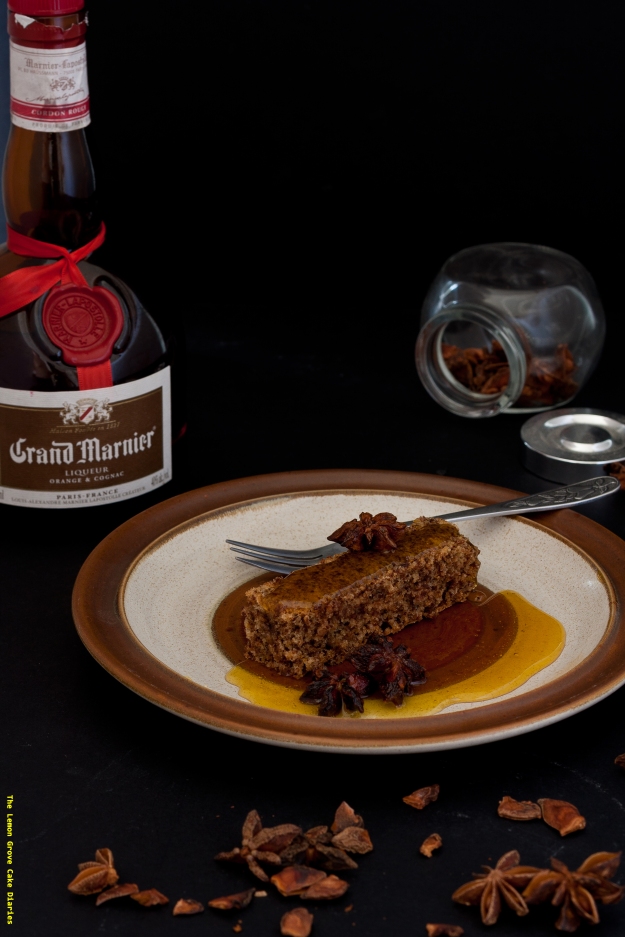 Without a doubt this is not the prettiest looking cake around, but paired up with the alcoholic orange syrup, which is infused with star anise, and this rather drab looking cake is turned into a taste sensation.

I found this recipe during my last term at cooking school. Our final exam for desserts was based on dietary requirements and the assignment was to make and serve four desserts that would cover four different dietary situations. The only other criteria was that we had to have at least one hot, one cold and one frozen dessert.

After scouring the internet and the library I came across this gluten free recipe in a book written by Pamela Moriarty called “Sharing sweet secrets gluten and wheat free“.

I made a few changes to the original recipe, the most obvious of which is the substitution of almonds with hazelnuts. I have left out the GF components in this recipe so if you want it to be truly GF make sure you buy GF bread crumbs and baking powder.

If you can stand the wait, this cake tastes even better the next day once the flavours have infused. 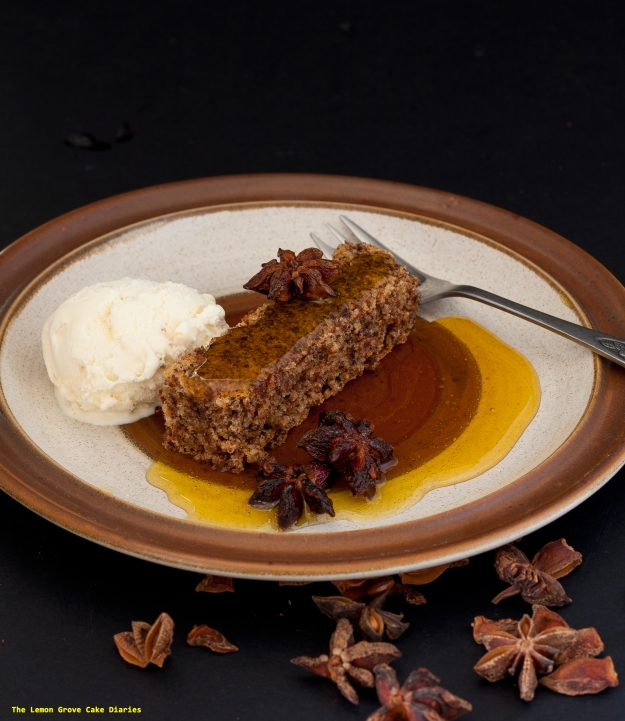 Process the hazelnuts in a food processer until roughly chopped.

Add chocolate and process until you have a breadcrumb like texture.

Place egg whites in the bowl of a stand mixer and whisk until soft peaks form. Gently pour egg white into a large mixing bowl.

Clean mixer bowl and place egg yolks and sugar into bowl, using the whisk attachment whisk until until thick and creamy.

Add orange zest, juice and alcohol then beat lightly together.

Gently fold in the nut and chocolate mixture then pour into the baking tin you prepared earlier.

Tip: Fold ingredients into egg white gently, try not to knock the air out of the whisked egg whites.

Bake for about 50 mins at 160 degrees Celsius (or until skewer comes out clean).

Remove from oven and place tin on a wire rack and leave for 10 mins to cool.

Turn the cake out onto a wire rack.

Cool completely before removing baking paper from base and sides of cake.

Boil for 5-10 mins to reduce to a syrupy consistency.

Tip: Watch syrup carefully when boiling, you need the syrup to be pouring consistency. If you leave it on too long it will become like a soft orange toffee (which I might add from experience tastes yummy).

I was thinking of ending the sourdough project if this batch didn’t turn out, but the second attempt produced three magnificent dark crusty loaves. The taste was reminiscent of bread we purchased in France. The verdict: Hamish gets to live another day…. 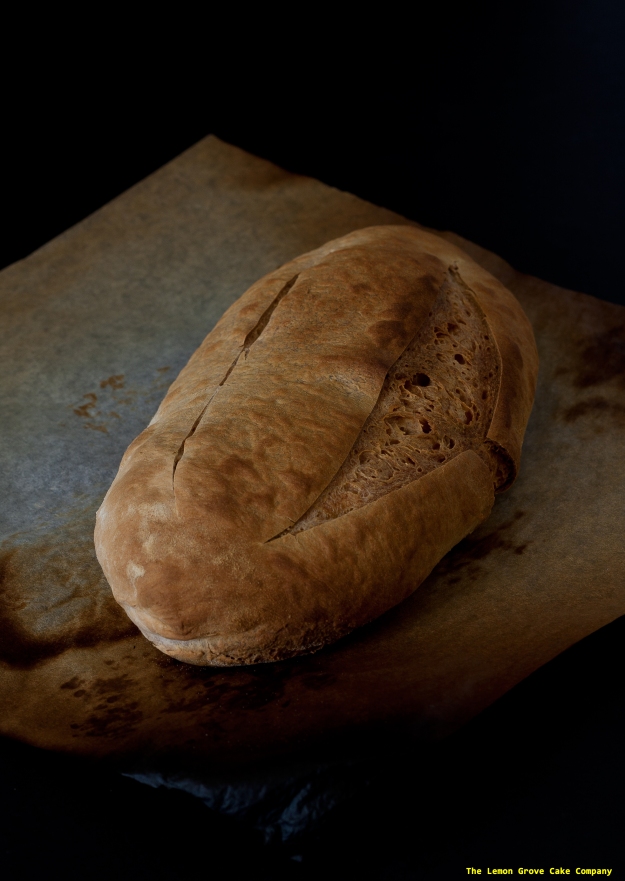 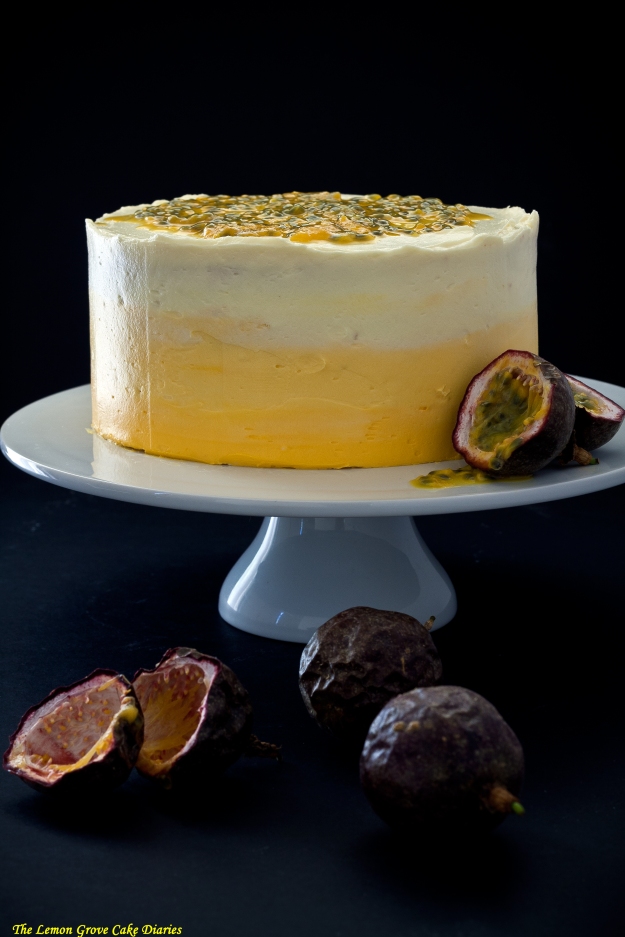 I have been up to my ears making cake, so much so that I have neglected my blog and have lots of reading to catch on from my favourite bloggers. So what do I do when I finally get a break and come up for breath? Yes you guessed it, make more cake!

I was seduced by this cake, there was something about it that just appealed to me, maybe it was it’s eye catching colours or the flavour of passionfruit, whatever it was I simply had to make this cake.

I first saw it, in Feast magazine, it was bright, pretty and cheerful looking – what was not to love? The outside was covered with a cream cheese frosting in an eye catching yellow ombre effect and the inside was all passionfruity goodness. I book marked the page and put it on my list of cakes to make.

So what’s to love about this cake?  Well the cake itself has a great texture and good flavour.

What’s not to love? For me I am not a huge fan of seeds in cakes and the passionfruit seeds had a potential trip to the dentist to fix a broken tooth all over them. The other thing I didn’t enjoy was the cream cheese frosting, there was just too much of it and even the sharpness of the extra passionfruit on top or the lemon juice I added to the frosting wasn’t enough to cut through.

On another subject, for anyone that is following the adventures of Hamish you will be pleased to know that he is doing well and due to make his first loaf of sour dough shortly… 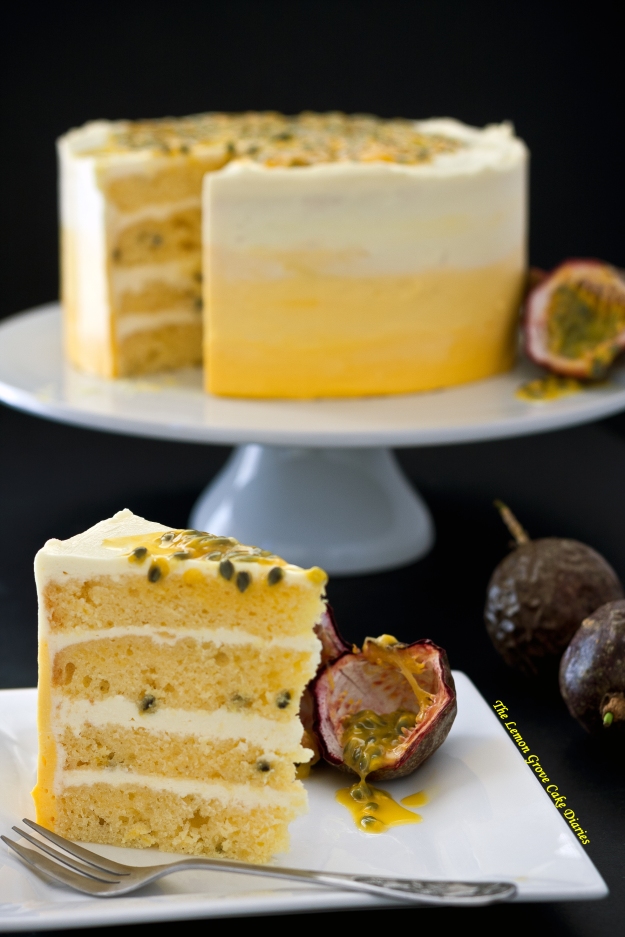 Preheat oven to 160°C. Spray 2 x 8″ cake pans with oil and line the base and sides with baking paper.

In the bowl of a stand mixer beat butter and sugar until pale and creamy.

Add eggs one at a time and beat well between additions.

Add sour cream and passionfruit pulp and mix until combined.

Remove bowl from mixer and fold through the flour with a spatula.

Divide mixture evenly between the two cake tins. Bake at 160°C for approx. 45minutes or until a skewer inserted in the centre of the cake comes out clean.

To make the frosting, beat the butter and icing sugar together until pale and creamy. Add cream cheese and beat until smooth and creamy.

To make the ombre effect on the icing take 1 third of the frosting and split it into two bowls. Colour one half a dark yellow colour and the second half a lighter shade of yellow. Set the remaining frosting aside for later use.

Spread the darkest shade in a line around the bottom side of the cake. Don’t worry about being neat or smooth.

Then spread the lighter shade in a line right above the first dark yellow line of frosting.

Spread the remaining frosting up the sides and on the top of the cake.

I wanted the cake to be a little rustic looking so I didn’t smooth the top of the cake. Spread passionfruit pulp over the top of cake. 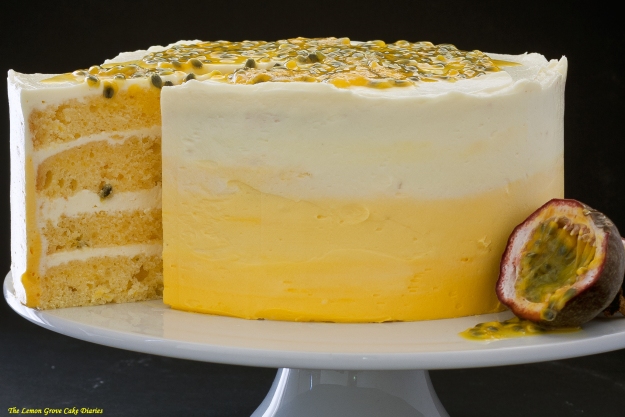 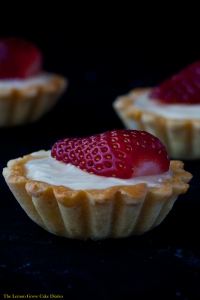 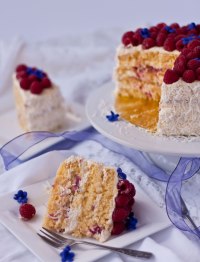 © Karen Douglas and The Lemon Grove Cake Diaries, [2014]. Unauthorized use and/or duplication of this material (including photographs) without express and written permission from this blog's author and/or owner is strictly prohibited. Excerpts and links may be used, provided that full and clear credit is given to The Lemon Grove Cake Diaries with appropriate and specific direction to the original content.